Toronto's gonna be legit soon with Mathews and Andersen.
Top

Rangers are going to suck.
Chase Utley is a bitch
Top

Meaning wrote:Rangers are going to suck.

Phat returns for Duclair now man. There must be another Hank in Round 6.
Top Las Vegas officially has a new team for 2017-18 season.
I'll still be waiting with my empty arena that cost us 300 millions ( I love my city.... )
Maybe we'll get a team back someday, Hopefully a transfer from Carolina or something 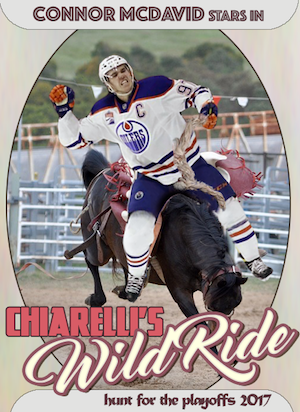 Grats on Matthew's and shit but we got POOL PARTY WOOO!
Top

Orrokk wrote:Las Vegas officially has a new team for 2017-18 season.
I'll still be waiting with my empty arena that cost us 300 millions ( I love my city.... )
Maybe we'll get a team back someday, Hopefully a transfer from Carolina or something

Pretty much nobody will ever get a team ever again with a 500m price tag. That shit is retarded
Top

Rush I am so so sorry. Holy shit how stupid is Chiarelli.
Top

Oilers definitely lost the trade pretty fucking hard but honestly I'm not pissed off. Yes they lost and I wish they could have gotten a much better return but something like this HAD to be done. The Oilers need a big culture shake up and there's potential for Larsson to be really fucking good.

That said why not Eberle + for Larsson

Hall is one of the best LW in the nhl and does basically all his scoring 5on5. I'm sad but hopeful it will be a good trade in 2 years

Edit: I just want to clarify why I'm not pissed at Chiarelli. Over the past 10 years the Oilers have been the worst team in the nhl, like it's not even close. And during those 10 years it has been extremely well documented that their biggest shortcoming has been defense.

Now imagine being Chiarelli and trying to trade for a premium defenceman to FINALLY try and fix the perennial basement dweller. He has absolutely no power in the negotiations, teams can ask for ridiculous trades because the Oilers are in a position of extreme desperation.

The reason previous GM's were completely unable to get that defenceman they needed so bad is because they didn't have the stomach to lose a trade for the future, and that's why we ended up with guys like fucking Nikitin. Chiarelli just took a MASSIVE risk by trading Hall but he's trying to do what other GM's couldn't. That's why he was brought in in the first place.

Anyway like everyone's mom has tols them, I'm not mad just disappointed.
Top

He wasnt liked by his teammate, was taking too much space. I don't really mind the trade, Montreal lost it but not by much. Weber is a hell of a defencemen lets just hope he can keep going for a little while now.

Taking too much space compared to Weber? Way to drink the Koolaid Orrok!
Top

What the fuck happened today. Holy shit. Stamkos staying for pennies after all that drama.
Top

Malarowski wrote:What the fuck happened today. Holy shit. Stamkos staying for pennies after all that drama.

Well Montreal got Radulov, why the fuck would they bring back a player like that.
He will play (actually trying) what, 1 game out of 5...

And Oilers picked up Lucic and Gustavsson. Lucic price isn't bad but the term sucks, but thats what you gotta do in UFA market. Guaranteed he plays the left wing with McDavid. Essentially the Hall trade was Hall for Larsson and Lucic, so not as bad as everyone thought.

Gustavsson is just to backup Talbot and give Brossoit another year in the minors, nbd.
Top

Don't drink the Koolaid either Rush. Hall to Lucic is a big downgrade, especially at this cost. 7 years for 6 mil is a fucking lot for a 40-50 point guy.
Top

If you read my long post about the Hall trade you'll see I haven't. Improving the D was vastly more important than keeping Hall, getting Lucic simply softens the blow of losing Hall.
Top

I agree with you on that, although the return is still a bit meek. Can't change it now, I guess.
Top

Oh ya the return was pretty awful, Hall is a top 3 LW in the NHL. But from everything I've read that was the best the Oilers were going to get, they were negotiating from an extreme position of weakness.
Top
Post Reply
49 posts

Users browsing this forum: No registered users and 6 guests