View the latest postArgus the Unmaker. Legion the Breaker

It's fitting that Legion would end with a boss dubbed "the Unmaker."

This expansion has been a tale of perseverance for the raiding community. The first few months saw one of the most toxic and demotivating raiding scenes I've seen in 10+ years of this game. The legendary system coupled with the early AP system created an entire raid tier where your performance was based on how well your guild members rolled the dice with their legendaries. The fact it required 3-4 weeks to obtain a second legendary (if playing the game 100% of every week, god forbid you wanted to not play hardcore) made rerolling a legit better alternative than farming. Failures could be pointed to either RNG, bad luck, or the lack of grinding your fellow raider did compared to you to get more AP. Raid nights cost 300k in raid materials alone due to the terrible lack of Herbs in the economy needed to maintain consumables for raiding guilds on a populated server like Mal'ganis.

Spike Flail went into Legion with 32 people on its roster. By the time we hit Helya in ToV just 10 weeks later we were down to 19, not even enough to raid.

Blizzard slowly fixed their mistakes and made the legendary system more accessible, the AP system less rewarding to grinding. The Blood vendor made raiding consumables accessible again. Legendaries could be obtained in half the time. Nighthold was a success, yet Tomb of Sargeras destroyed the raiding community again. Some of the hardest and most punishing boss mechanics created in the game led to the destruction of guilds left and right. Mistress was the tightest mid-tier boss Enrage check I can ever remember. Fallen Avatar was difficult enough to be its own end boss. KJ was a fight of 10+ mechanics that would instantly wipe your raid if a mistake was made. Guilds continued to fall and burn out. More "unmaking" if you will.

Antorus was a step in a refreshing direction, but by now the damage had been done. Many had quit from the burnout of FA/KJ, and never made to the end of the expansion. Spike Flail ended Legion with only 8 members on the roster who were part of at the Archimonde killing team of December 2015.

Despite these challenges, despite the turnover, despite the punishing systems... Spike Flail was able to thrive in this insane raiding environment Blizzard had thrown at us. But the expansion was one of bipolar personalities for us. We struggled heavily in Emerald Nightmare and ToV, with those first few weeks of raiding again in Legion being some of our most embarrassing performances. Thoughout EN, ToV, and Nighthold, we were never able to recapture the magic from late HFC and come even close to our previous success rates. Easy bosses like Chronomatic Anomaly gave us more fits than they should have, putting us perpetually behind the curve. We couldn't dodge Elisande rings to save our lives (literally). A stable Holy Paladin main was a figment of Palin's imagination.

Something changed the last half of the expansion. We ended Tier 19 barely a blip away from US#200, and knew that was unacceptable. Maybe it was that shame from Nighthold that drove us. Maybe it was the steady influx of new recruit talent we were amassing, people who weren't jaded by Legion's systems and instead embraced it. Maybe we just got gud. But as other guilds fell apart and complained, we thrived in the chaos of Tomb of Sargeras, and finally started meeting the goals we set for ourselves prior to Legion's launch. We steadily improved, powered through and found ways to make gains on the hardest bosses the game has ever seen. Throughout it all, we were finally performing at a level we could be proud of.

That momentum flowed into Antorus, which thankfully was significantly less challenging and punishing than ToS. I'm proud to say we ended Argus progression on our highest note of the expansion, both in kill ranking and pull attempts. Previously in the expansion we were requiring far too many pulls to kill bosses, needing more facetime than the average guild for some reason. But on Argus we reversed that trend and had 9 nights of steady, baby step progression. There were no set backs, no deprogressing, no nights where zero gains were made. We slowly chunked away and learned piece by piece the fight, ending at a respectable 242 pulls. We had saved our best performance for last, and done a complete 180 on the way we started Legion. We had finally purged our demons. 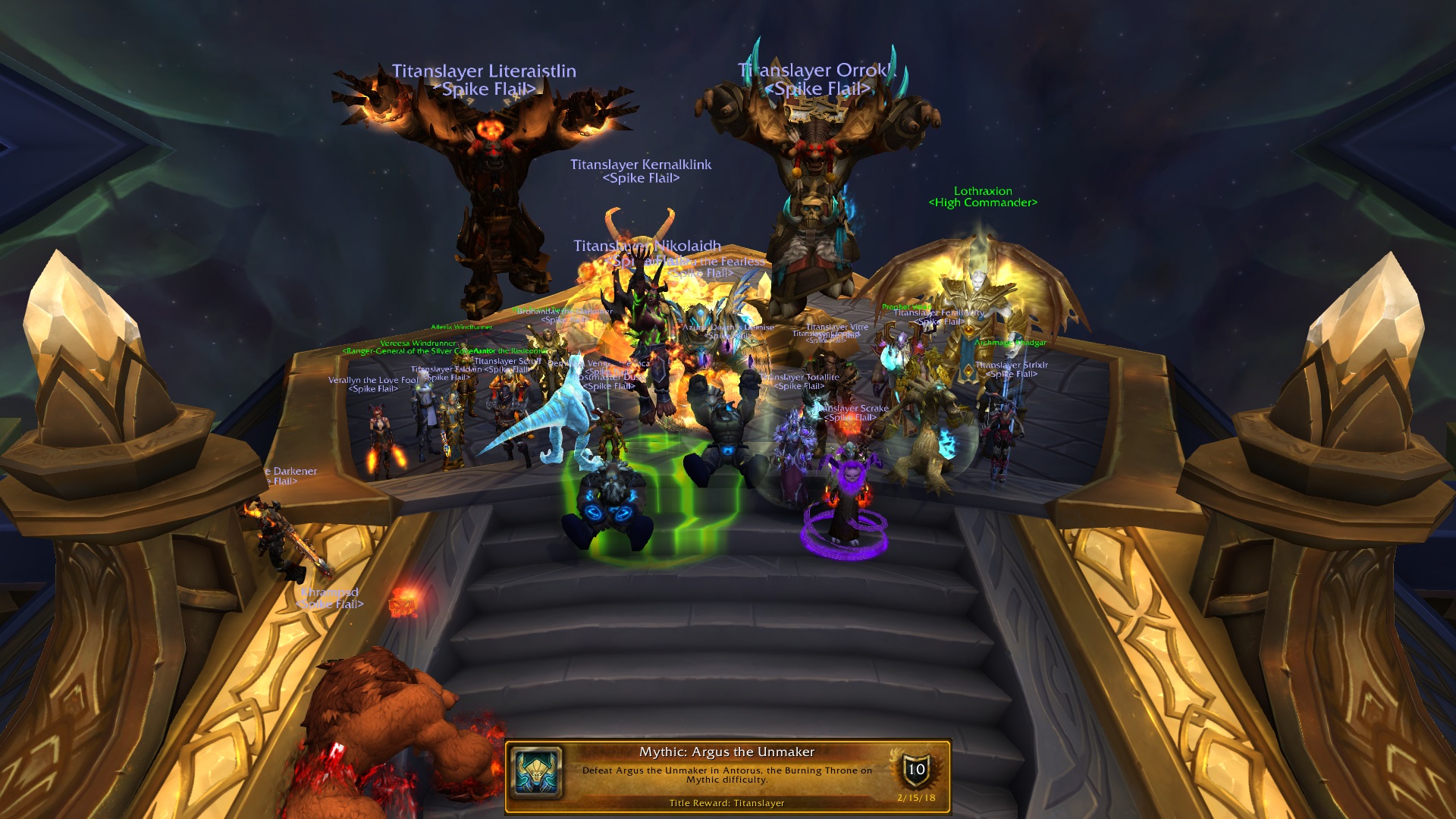 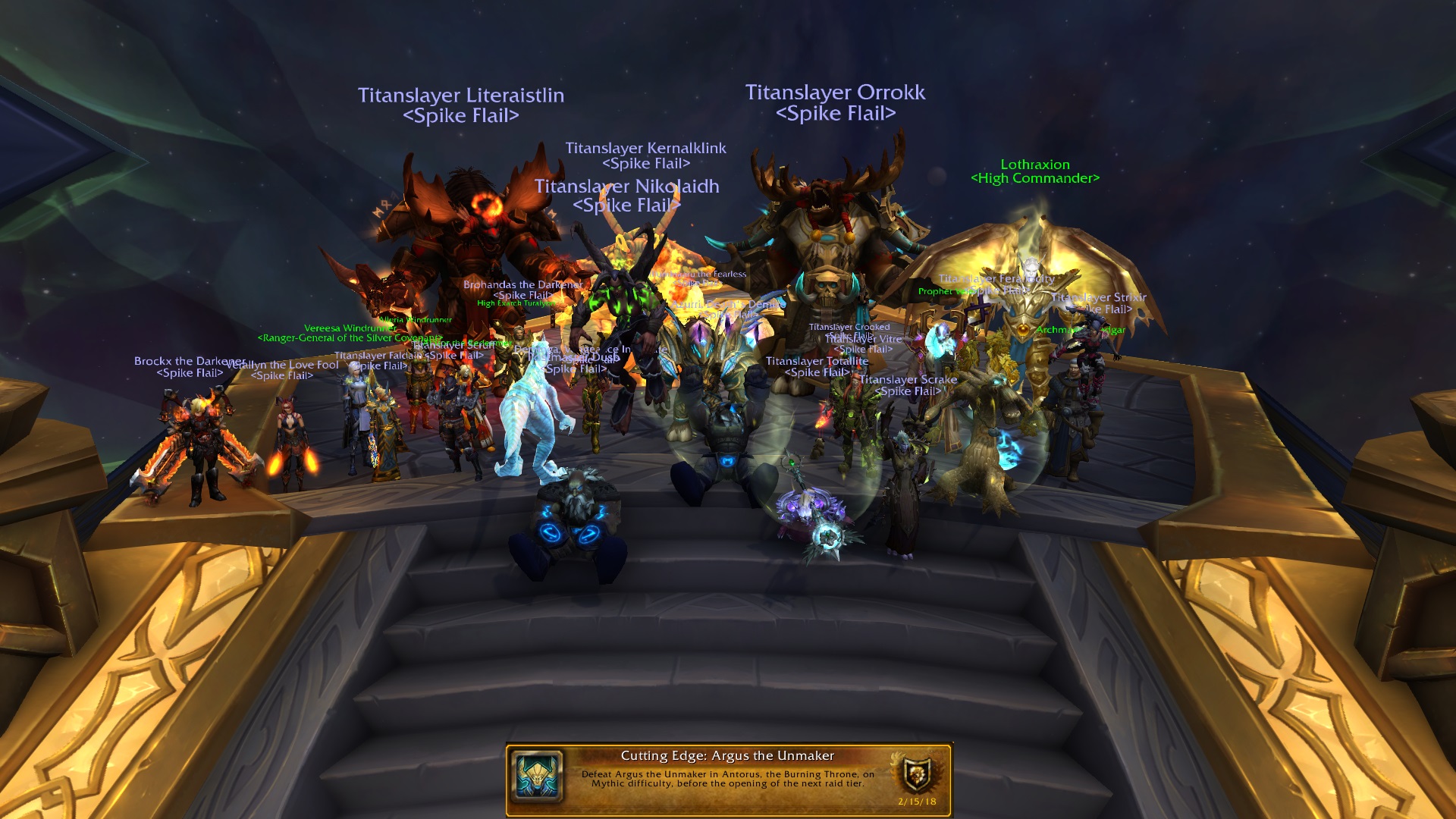 I'm extremely proud of what we accomplished this expansion, and the growth we showed as a team. The frustrations and long nights pouring over logs and vods paid off seeing our guild push new accomplishments and become a more well oiled machine each new tier.

To those of you still here from Day 1 of Emerald Nightmare, who saw us fall then rise, who stood by through thick and thin - thank you for your perseverance. Looking at your names I can say with 100% confidence every single one of you is a better WoW raider today than you were at the start of this expansion. You all pushed yourself to constantly improve and carry us to new heights, and I appreciate each and every one of you.

To those who've joined somewhere in between, thank you for bringing your skills and knowledge to our team and for making us a better guild. You've all become integral parts of this community and I'm proud to have you at my side as we achieved our goals this expansion. We couldn't have done it without your contributions, and I look forward to future tiers with you all.

So we end this expansion looking at the long farm ahead of us, and at BFA in the distance. We learned a lot of lessons between HFC -> Emerald Nightmare and how we can better prepare ourselves to not make the same mistakes of the past. For now we'll enjoy the ride and the well deserved break from progression, and try to keep our skills sharp for Fall 2018. Hopefully this time Blizzard will have learned from their mistakes as well. 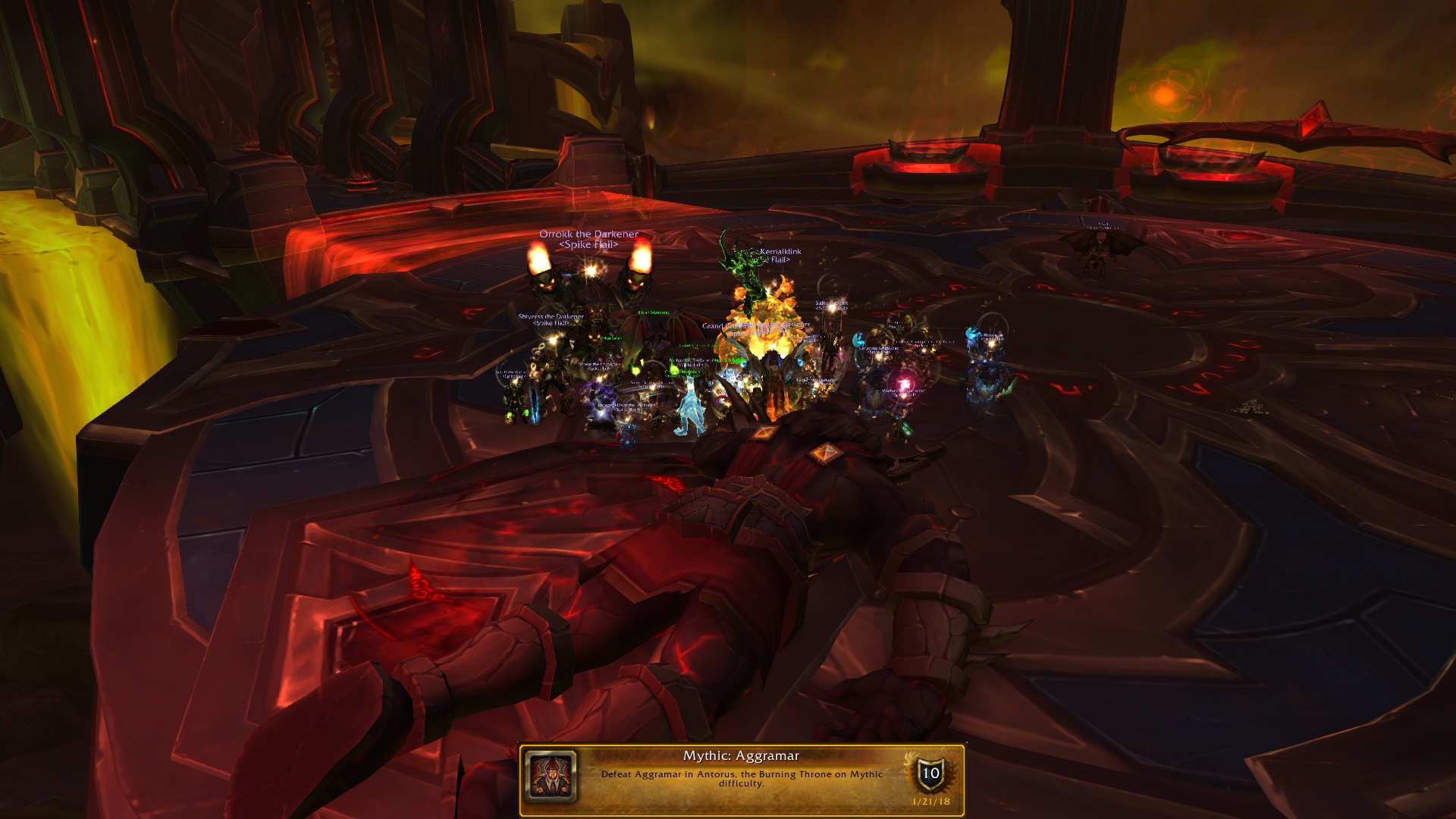 One more boss of Legion left!

Antorus opening weeks saw a blitz and a rush to tackle the 'easier" bosses quickly and put ourselves in good position through the holidays. All in all we ended up finishing 9/11M after 21 days from Mythic opening. What a whirlwind!

First 3 bosses we didn't SS cuz they were too faceroll.

Our first big challenge came on Portal Keeper where we maybe underestimated her mechanics slightly. Was a good wake up call to take these "easy" bosses seriously still and not lose focus. 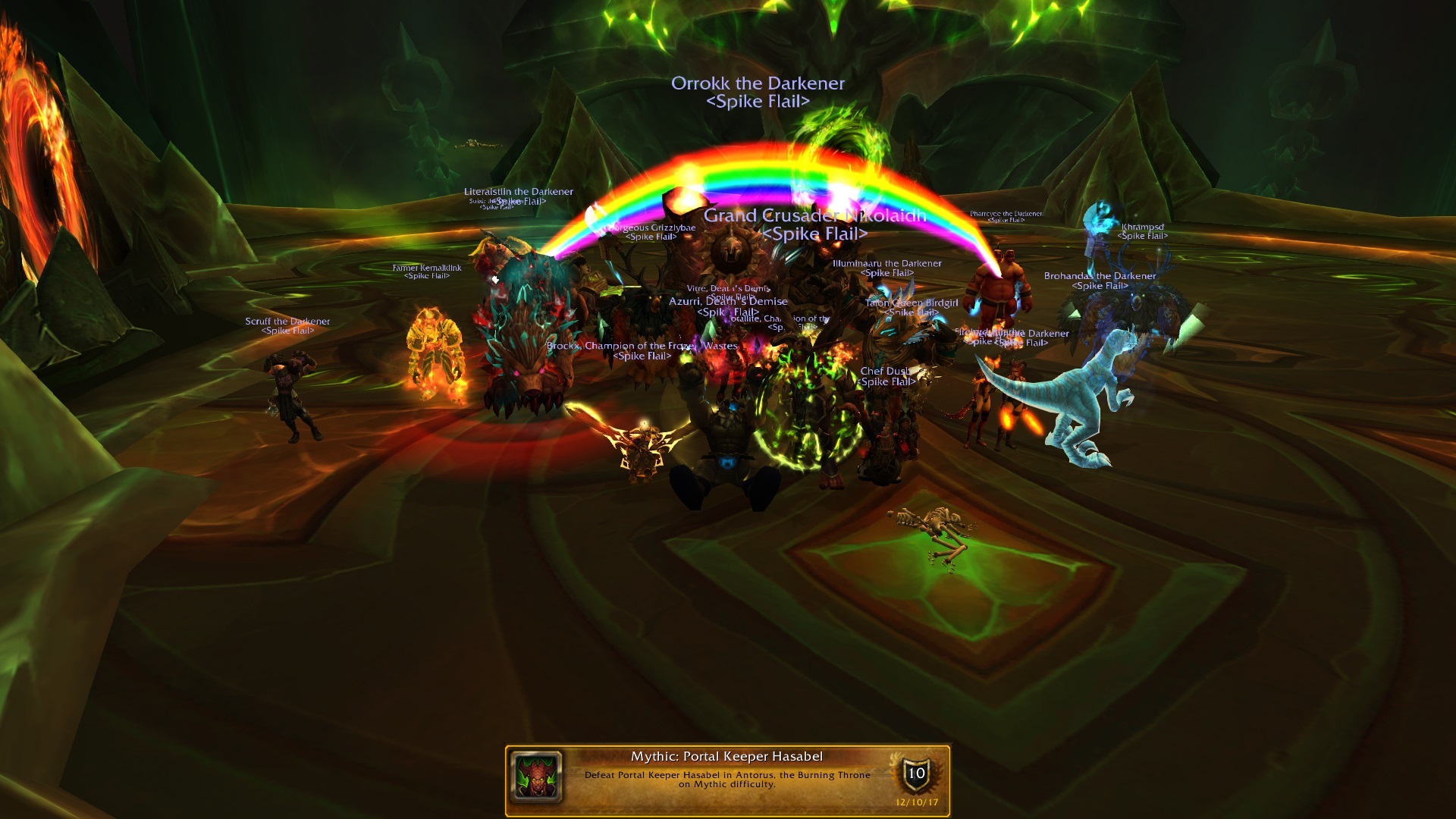 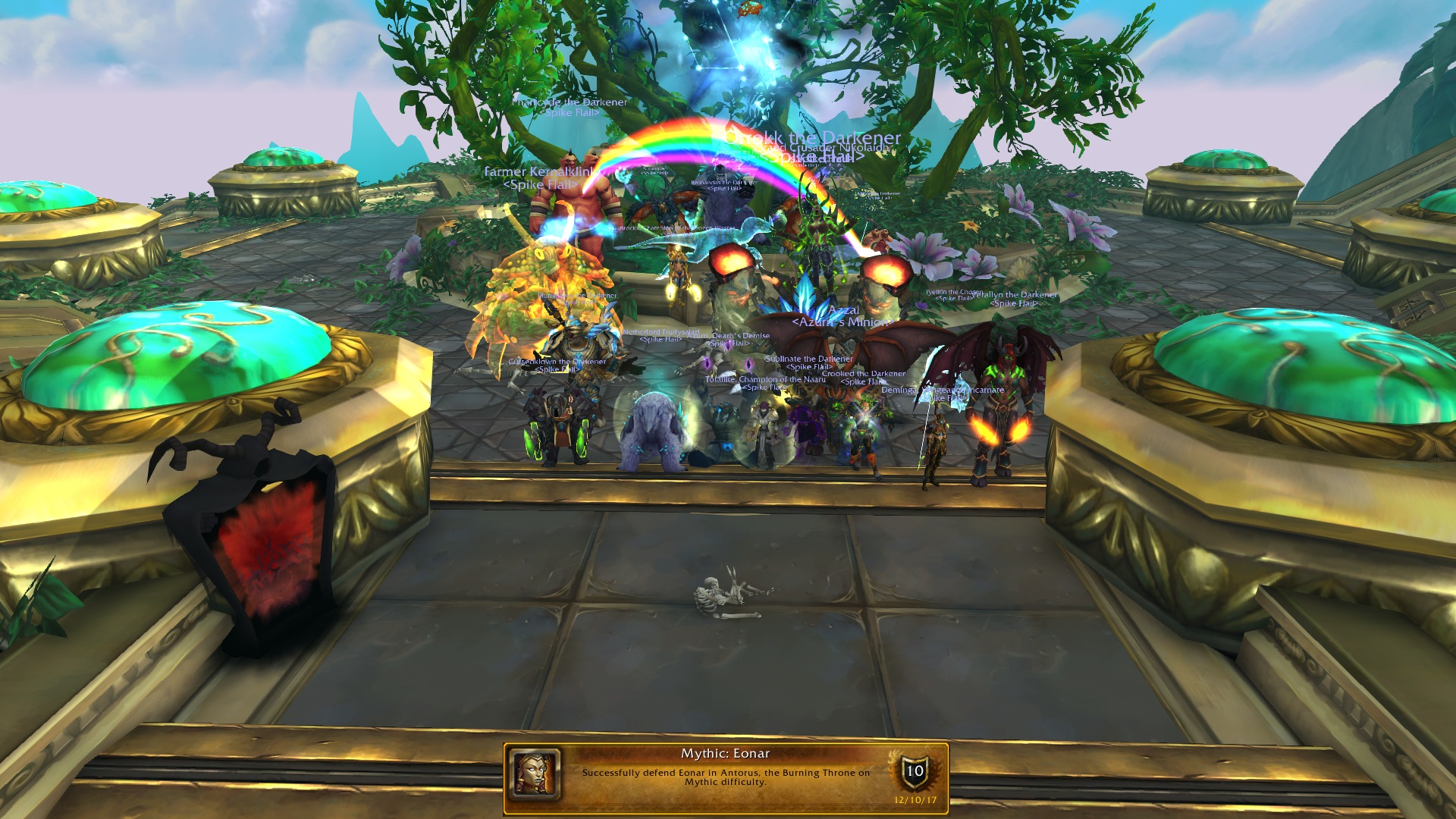 Imonar saw a step up in difficulty and a fun challenge. 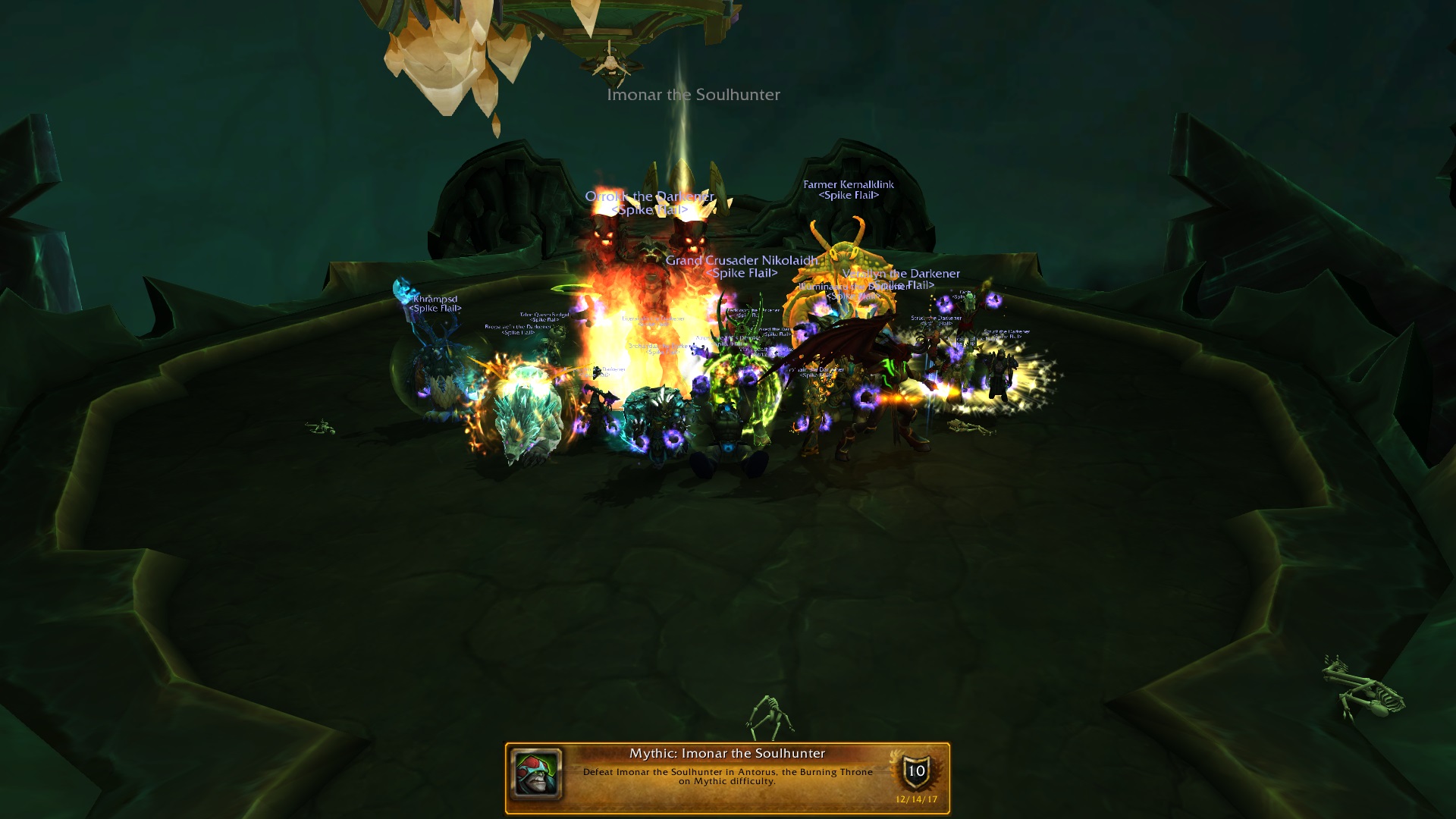 Kin'garoth saw another jump in difficulty but ultimiately a refreshingly different type of fight than we'd seen in the past. Also BALLS. 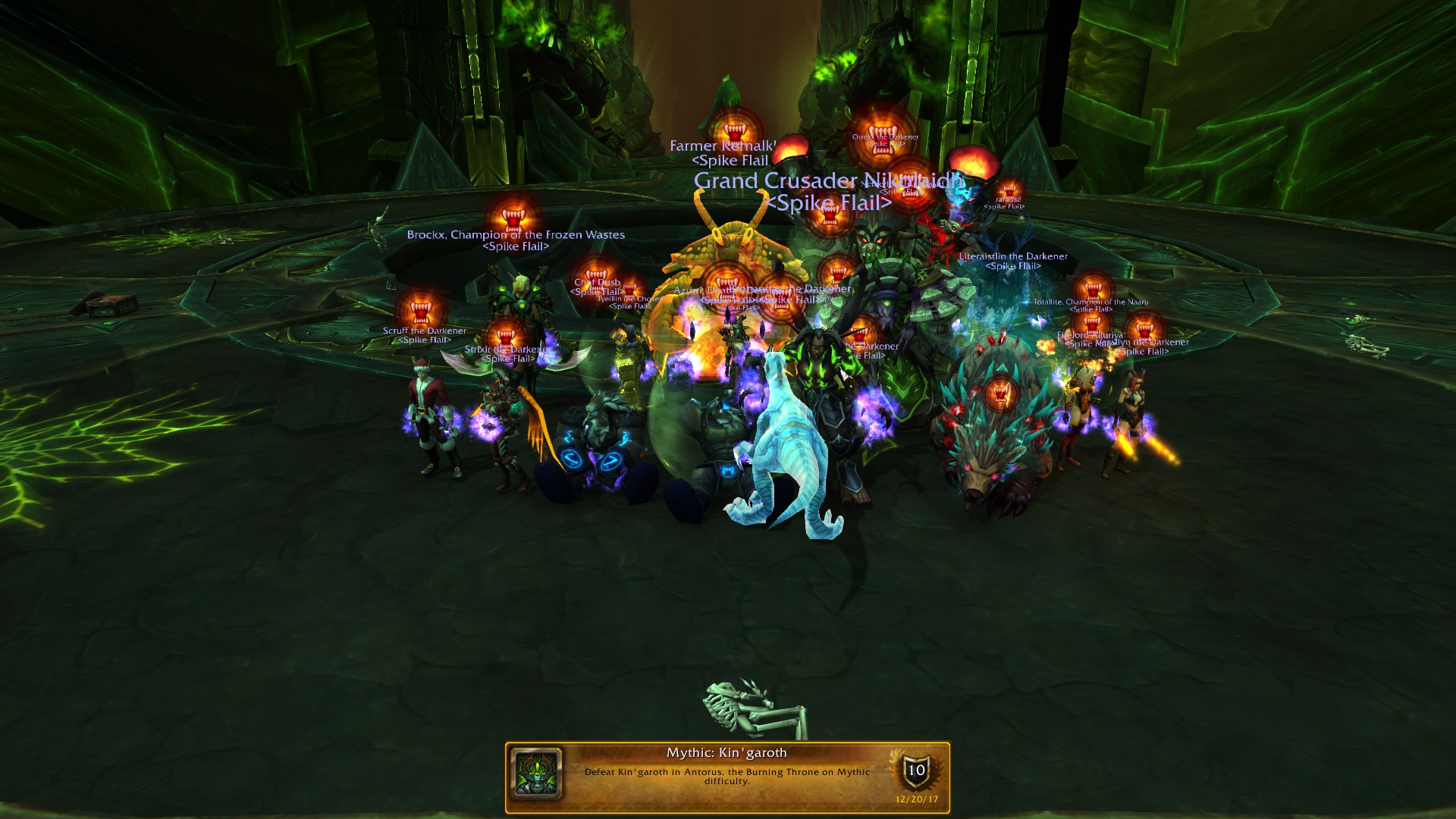 Our healthy roster allowed us to raid between Xmas and New Year which allowed us 2 new kills. Varimarthas was painful, not a fan of onemistake=wipe type fights. Was a sigh of relief when this one was done: 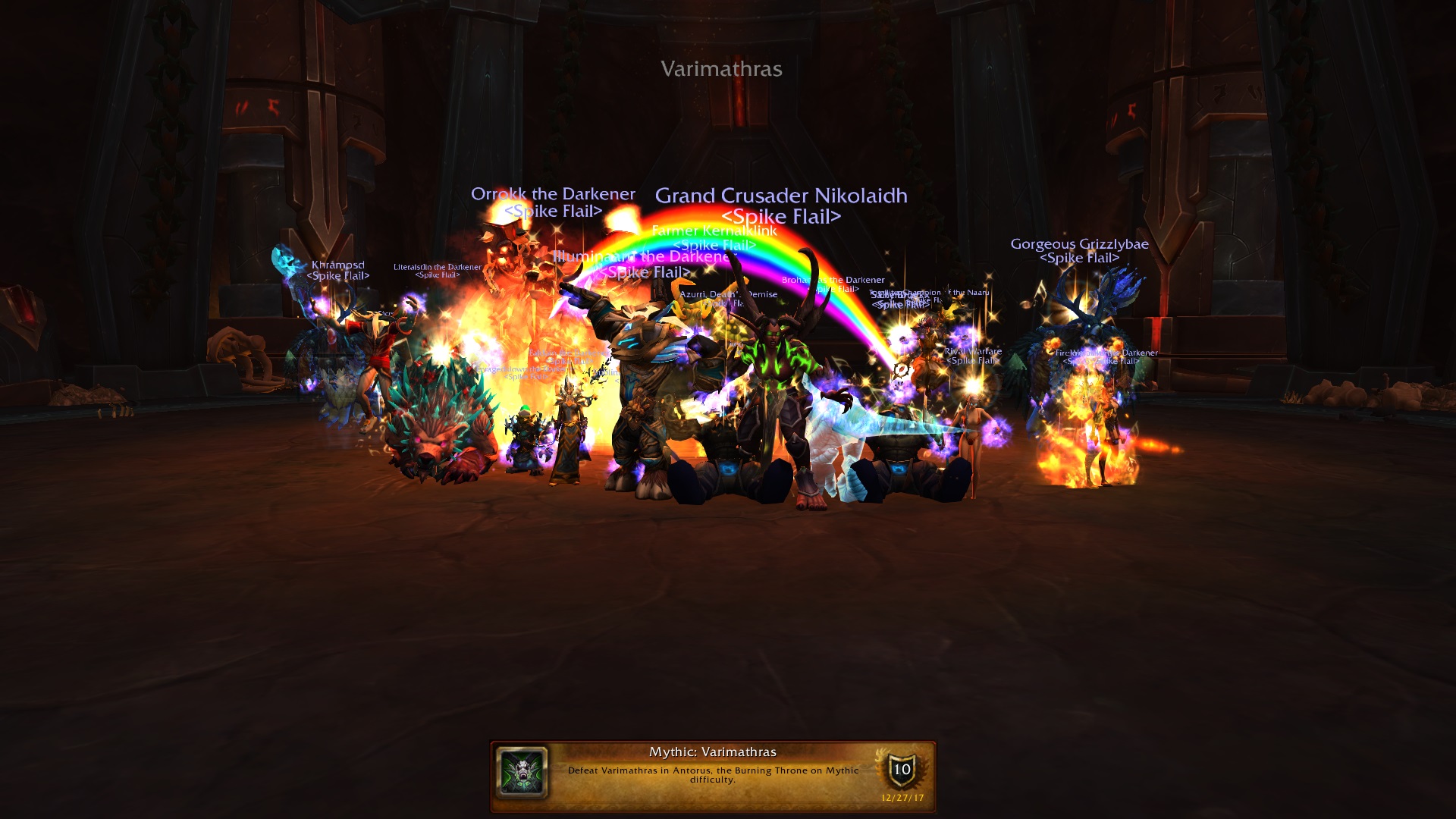 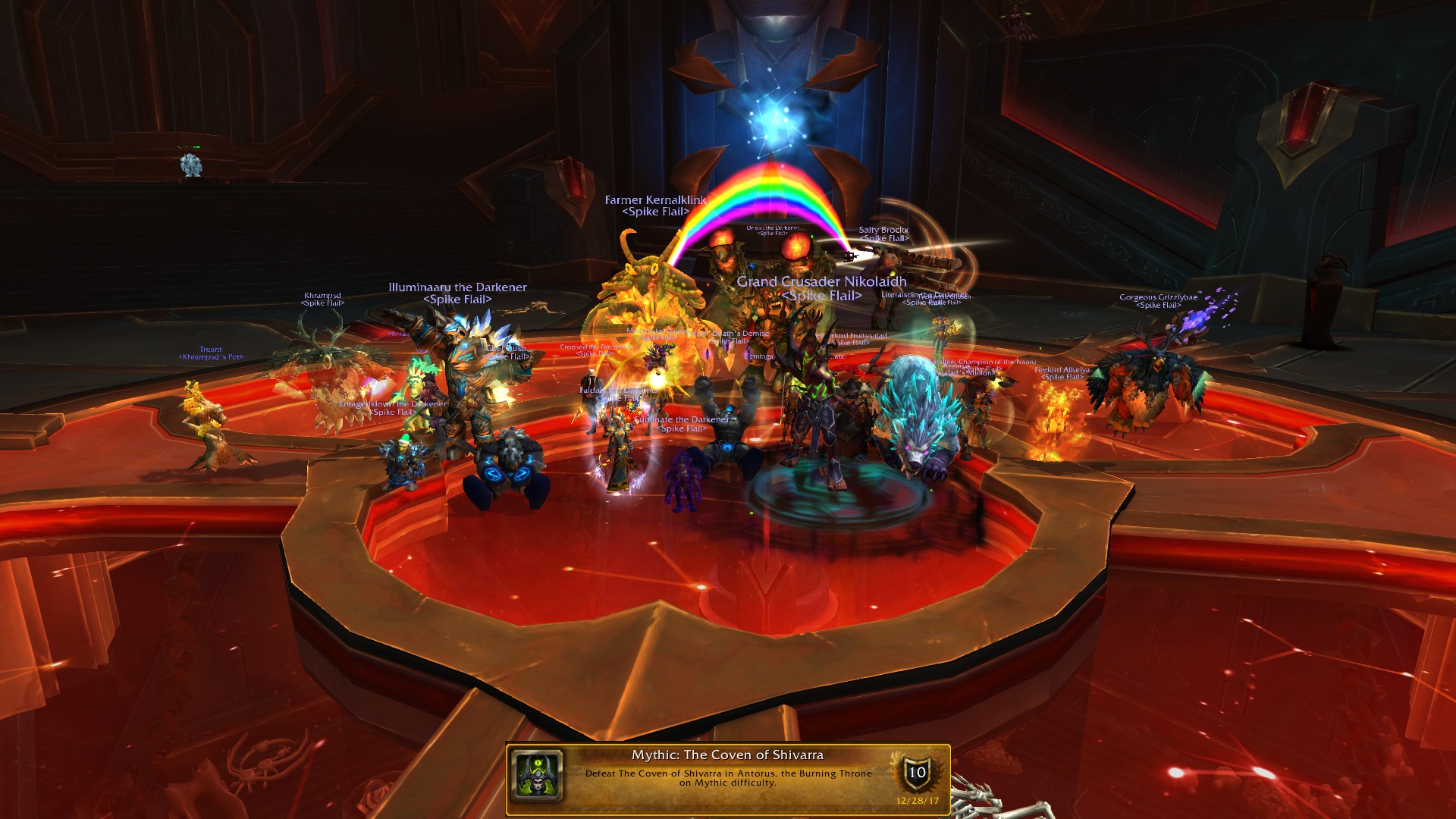 Nice job everyone, thanks for pushing hard through these opening weeks and the progression rush. Agrammar on Sunday do it!